A bit of background: I’m an American lady traveling through Italy on her own. 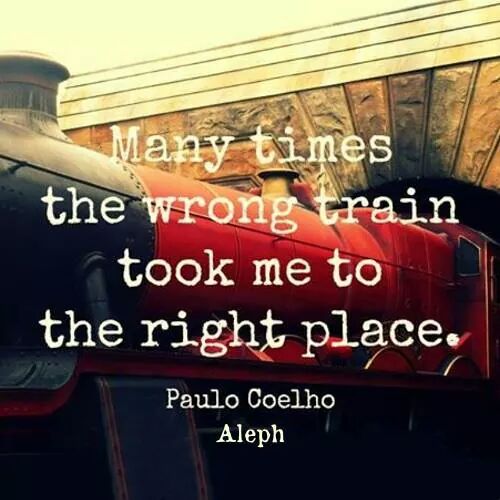 Yesterday I hopped on the “wrong” train that happened to arrive on the same platform of the train I was supposed to get on just ten minutes earlier than the “right” one. This “wrong” train was heading in a completely different direction to where I wanted to go. Realizing my mistake, I panicked, ran around the seats trying to speak any language I could to alert the others that I needed to get OUT!
The door closed right behind me, and even though the train was parked for at least another five minutes, the doors never opened again…somehow my banging didn’t work! Imagine that!
Of course once I settled down, I realized all was OK. I hadn’t yet booked a hotel for the night. In fact, I tried to book an Airbnb right before I hopped on the “wrong” train but the blessed woman declined me!
Now I say “wrong” train only because it was a different train than the one I had bought a ticket for. When traveling through Italy I don’t believe there can be a “wrong” train. And this is one of those moments that I believe the universe has my back.
Also, it was only me — I wasn’t meeting anyone until Monday, and the only plans I had for the weekend were in my own head. Funny how your head can take over at any rate!
I recomposed myself, went online on the map and saw this train had a stop in Milan. I didn’t want to go to Milan because I was heading there next week for work (I know!). Parma was on the way to Bologna (my eventual destination for Monday), I had never been and a few clicks of research told me this would be an adorable place to go.
After my incident when I first arrived in Paris, I have to admit that I was a bit timid to travel by myself again. (In case you missed it, I was groped two times by the same man within five minutes the first week of living in Paris. Fun times!)
I’ve actually never been fond of traveling alone at all — despite what my life may seem like. I would much rather have my boyfriend or a best friend or sister or mom with me. I prefer to share the experience, and I do get quite afraid at times. I actually looked at tickets back to Paris Friday night because I started seizing up at the thought of being alone all weekend in a city/cities I didn’t know at all.
Also no one else from the conference was taking advantage of the weekend like I was, so I started wondering if I was doing the right thing. Then I breathed deep, told that voice to STFU gently, and persevered.
And you know what I found out? I wasn’t alone at all!
I had an old Italian man speaking Italian I miraculously understood to get me from one train to the metro to catch the other. I had a French couple who tried to knock down the door with me. I found an incredibly sweet little lady who picked me up from the train station in Parma in the city famous for its Lamborghinis, prosciutto, parmesan and classical music!
So now I’m here about to start on another mini-adventure. Maybe it’s the new side-shave that makes me feel extra badass. Or maybe it was that guy in Paris who made me realize I can’t walk through life unaware.
This time feels different…but probably only because I allowed it to be so.
My point?! Allow it to be so!!
Seems like an easy point to make but damn do I have to keep re-teaching myself that!

Why you must heal yourself first before taking a stand